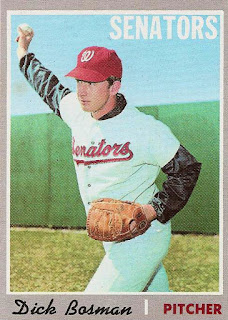 Dick Bosman, shown here on card 175 of the 1970 Topps set, was looking to build on a great 1969 season. Bosman's control had been great in 1969 as he led the league in ERA. The Senators expected some great things from him in 1970.

Dick would spend the entire 1970 season with Washington and appear in 36 games. 34 of those appearances were starts - a team high. Over a team high 230.2 innings pitched, Bosman compiled a rotation best 3.00 ERA and 1.227 WHIP. That ERA was also good for sixth best in the American League. Dick's 134 strikeouts were second best on the team and he stayed in the black as he walked just 71 unintentionally. He also tossed three shutouts to lead the club in that category as well. Those numbers led to Bosman ending the season with a 16-12 record. The most wins on the team and tied for the highest winning percentage in the starting rotation. Not an easy feat considering the lack of run support he received.

All in all the Washington Senators had to be pretty happy with Dick Bosman's performance in 1970. He had seen his numbers slide up a bit over his 1969 effort but it was still a nice season. Bosman seemed to be settling into the role of staff ace for Washington and was one of the few bright spots on the team. He had a lot to build on going into 1971 and, once again, the Senators were expecting good things from him.
Posted by Spiff at 9:33 AM