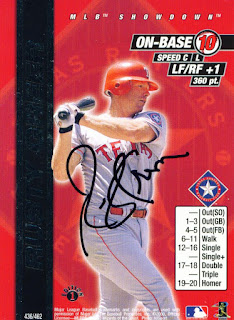 Well, my attempt last week to improve the Rangers' luck worked only so-so. It didn't help the team get over the hump against Sonny Gray or avoid a series sweep by the A's. Going to try again this week with another Texas fan favorite and see if we can get the boys going.

Rusty Greer played the game hard and spent his entire career with the Rangers. I sent this 2000 MLB Showdown 1st Edition card to him long after his career was over. The card went out on May 5, 2009 with a short note asking Mr Greer to sign it. He did so and it ended up back in my mailbox on July 29, 2009. Not too bad of a turn around for a guy who's probably swamped with autograph requests.

Hopefully the Red Baron will bring the Rangers some luck as they finish up their series in Baltimore and head home to face the Angels and Diamondbacks. Some luck and a hot streak would be just what the team needs to get their feet back under them.
Posted by Spiff at 11:22 AM