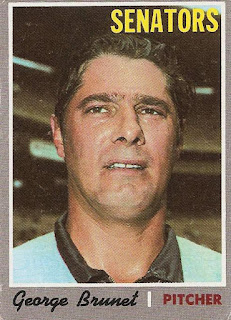 George Brunet spent the 1969 season with the Pilots during the one season the team had there before Bud Selig moved them to Milwaukee and renamed them as the Brewers. Brunet, shown here on card 328 of the 1970 Topps set, would never take the field as a member of the Brewers. On December 4, 1969 Milwaukee sent him to Washington in return for pitcher Dave Baldwin. Both teams were essentially taking a flyer on the player they were getting in the trade.

George appeared in 24 games for the Senators in 1970, 20 of those appearances were starts. The lone lefty in the rotation, he pitched a total of 118 innings and tallied an unsightly 4.42 ERA and 1.458 WHIP. That was the highest WHIP and second highest ERA in the starting rotation coupled with the lowest number of innings pitched. Brunet struck out just 67 opposing batters while walking 48. He got lucky though and his numbers translated into a 8-6 record. Strangely enough, that tied him for winning percentage with ace Dick Bosman at the top of the rotation.

Apparently the Senators decided they had seen enough and it was time to take another shot at a solution for the back end of the rotation. On August 31, 1970 Washington sent George Brunet to Pittsburgh. In return the Pirates shipped left-hander Denny Riddleberger to the Senators.
Posted by Spiff at 9:56 AM