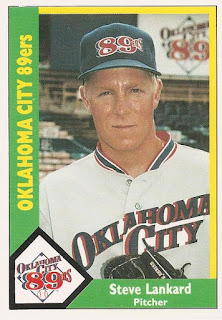 The Rangers drafted Steve Lankard, shown here on 1990 CMC card 152, in the 20th round of the 1985 draft. Players taken that late in the draft tend to not have high expectations attached to them.

Lankard started his pro career in 1985 with the Rookie League Gulf Coast Rangers. His 1.19 ERA over 37.2 innings was good enough to get him promoted to Single A the same season. In three games and 16 innings with the Burlington Rangers Steve crafted a 0.56 ERA.

1986 was a lot bumpier for Lankard. He watched his ERA balloon to 5.12 over 114.1 innings with the Single A Salem Redbirds. In 1987 he tossed 88.2 innings for the Single A Port Charlotte Rangers and lowered his ERA to 2.44. That was good enough for a ticket to Double A for the following season.

Steve spent 1988 with the Tulsa Drillers and put together a 3.78 ERA over 69 innings. He would start the 1989 season with the Drillers and toss 66.1 innings while putting up a 3.12 ERA. That got him moved mid-season to Triple A Oklahoma City. Things again got rough as he finished the season with a 7.41 ERA over 17 innings for the 89ers.

I don't know if Steve suffered an injury, if the Rangers cut him, or if he just decided that at 27 years old there wasn't much of a chance of him getting to the Majors. Whatever the case, 1990 was Lankard's last as a professional ballplayer.
Posted by Spiff at 11:30 AM