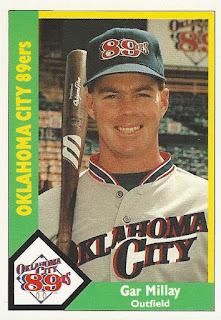 Gar started his pro career immediately at Single A. He split 1987 between Single and Double A and 1988 between Double and Triple A. Apparently the Rangers decided Millay needed some more work so he spent the entire 1989 season at Double A Tulsa. He was assigned to Triple A Oklahoma City for the 1990 season.

In 104 games for the 89ers, Gar posted a .257 batting average and a .344 on-base percentage. His moderate power was demonstrated by his 16 doubles, two triples, and three home runs. He scored 39 runs while accounting for 42 RBI. His four stolen bases showed he could steal on occasion. The four times he got caught stealing showed he could also get caught on occasion. Unfortunately, Millay walked just 38 times while striking out 53 times.

Gar was the third most used outfielder with OKC. He played in 68 games in the outfield and committed just one error in 124 chances. That gave him a .992 fielding percentage. When not in the outfield Millay played 22 games at first base, chalking up six errors in 176 chances for a .966 fielding percentage. Gar also took the mound for the 89ers in one game, pitching one inning and giving up two runs. That left his career ERA at 18.00 to go along with his 3.000 WHIP.

1990 was a mixed bag for Gar Millay. His batting average went up while his on-base percentage dipped. His power also dipped while his strikeouts and walks switched places from the previous season. He was serviceable at first base and a decent outfielder. The problem was that the Rangers had Rafael Palmeiro at first base and a pretty crowded outfield in the early 1990's. Millay was effectively blocked unless he could get a big enough power bat to draw some attention.
Posted by Spiff at 10:58 AM