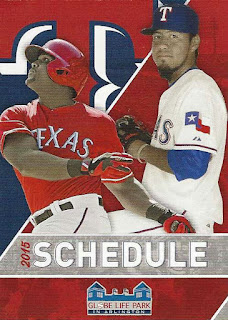 Well, the Rangers 2015-2016 off-season is in full swing and things are happening. The Rangers made a qualifying offer to Yovani Gallardo, shown here on a 2015 pocket schedule along with Adrian Beltre. Gallardo has now officially turned down the offer. Texas will likely continue to negotiate with Gallardo but will also get a compensatory draft pick if he decides to sign elsewhere.

Contract negotiations aside, General Manager Jon Daniels mentioned early in the process that Texas would be looking more to trades than free agent signings to improve their roster this off-season.

That statement seemed to hold true with the trade of outfielder Leonys Martin and reliever Anthony Bass yesterday. Both went to Seattle in a deal that brings reliever Tom Wihelmsen, outfielder James Jones, and a player to be named later to Texas. Wilhelmsen is a veteran reliever whom the Rangers have seen frequently and occasionally pummelled. However, he had a decent 2015 campaign and generally is very reliable out of the pen. Jones is a young, late-blooming outfielder with limited Major League experience. He appears to have limited power but can run, has a strong arm, and can play center field. The player to be named later will probably not be announced until after the Rule Five draft.

I can't say I have any thoughts one way or the other about Anthony Bass being traded. He performed well for the most part as a long reliever out of the Texas bullpen. Bass just didn't make a big impact and I have few memorable moments that I can recall involving him. As for Leonys Martin, he leaves Texas as a little bit of a disappointment. The Rangers first big Cuban signing, Martin was supposed to quickly mature to the center fielder of the future. His defense kept moving in the right direction but his bat just couldn't seem to make the transition. In spite of occasional success, he never made the transition to facing Major League pitching. After spending time on the disabled list in 2015, he lost the center field job and got left off the Rangers post-season roster. They asked him to report to Surprise, Arizona to continue workouts in case they needed him. He never showed. One has to assume that played a role in making him available for trade.

On the surgery front, Josh Hamilton had a second surgery in his left knee in late October. This one was for "clean up" and he appears to be recovering well. Should be ready for Spring Training, barring any other injuries or mis-behaviour.
Posted by Spiff at 11:05 AM