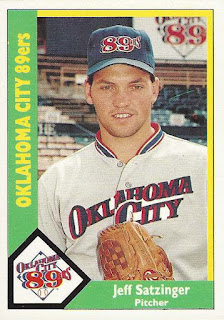 The Rangers traded for pitcher Jeff Satzinger in April of 1990, sending Fred Manrique to the Twins in exchange. By the time Satzinger, shown here on card 158 of the 1990 CMC set, came to the Rangers, he had been in the minors for seven seasons and never made it above Double A.

The Rangers immediately assigned Jeff to Triple A Oklahoma City and he started the season there. Satzinger appeared in 23 games for the 89ers, mostly out of the bullpen, with only four starts. In the 47.1 innings he pitched, he put up an unsightly 5.13 ERA and 1.648 WHIP. It didn't help that Jeff walked 27 opposing batters while striking out just 23. Unsurprisingly, he ended up with a 1-4 record.

Apparently a partial season was enough for Texas to conclude they had not gotten a diamond in the rough. Mid season the Rangers sent Satzinger to the Braves. He was assigned to Double A and finished out the year there. That would end his professional playing career. While it is strange that Jeff appears on a card with OKC, perhaps it is fitting. After all, a person's highest level of achievement in a career deserves some recognition.
Posted by Spiff at 1:12 PM