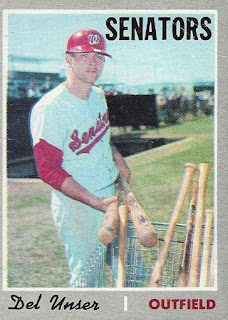 Today we see Del Unser checking out the lumber on card 336 of the 1970 Topps set. Based on the dugout in the back ground and the cart of bats, this almost certainly has to be a Spring Training shot.

Unser was coming off a pretty decent 1969 season but ended up losing his starting role to Ed Stroud. No longer the Senators center fielder, Del would spend the 1970 season in a fourth outfielder role. He played 333.1 innings in right field over 49 games, 312 innings in center field over 46 games, and 38 innings in left field over 9 games. The only errors Unser committed were in right field where he tallied three miscues. That dropped his fielding percentage in right to .962. That was a distance below the league average .975 but he was perfect in center and left. It also helped that Del had more range than the average outfielder in the American League.

Unser made 358 trips to the plate for Washington in the course of 119 games. He compiled a .258 batting average and a .319 on-base percentage. Both were significant drops from the previous season. Del's power dropped as well as he put up just five doubles, one triple, and five home runs during the course of the season. He scored 37 runs while accounting for 30 RBI. Unser's struggle with the strikeout intensified as he struck out 29 times while working just 30 walks.

1970 was a let down season for Del Unser. Coming out of the 1969 campaign, it looked like Del had center field nailed down. Instead, he lost his starting gig and watched his offensive numbers tail off. Of course, Ed Stroud hadn't exactly blown the doors off at the plate either. The possibility of Unser regaining a starting role for 1971 in the Washington outfield still existed. Offensive production appeared to be the key factor in that task.
Posted by Spiff at 10:43 AM