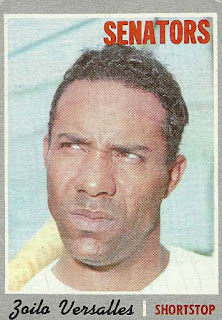 Zoilo Versalles does not look very happy on card 365 of the 1970 Topps set. It also looks like he is still wearing his Twins uniform, in spite of having left Minnesota after the 1967 season. In Topps defense, Versalles didn't stay very long with any team after departing the Twins. Between the start of the 1968 season and when the Senators purchased his contract on July 26, 1969, Zoilo played for the Dodgers and Indians. He was also briefly part of the expansion Padres but never suited up for them.

Versalles was a backup with Washington in 1969, playing in just 31 games while batting .267 with a .304 on-base percentage. An old back injury, suffered while with Los Angeles, hindered his usefulness. The Senators ended up releasing Zoilo on April 6, 1970.

Versalles played all of 1970 and part of 1971 in the Mexican League before the Braves bought his contract and brought him back to the Majors. He would finish out the 1971 season with Atlanta before being released. 1972 was spent playing in Mexico and Japan. 1973 saw Zoilo at Double A as part of the Royals system for part of the season and back in Mexico for the remainder. He also played in 1974 in Mexico before hanging up the spikes for good.
Posted by Spiff at 10:46 AM