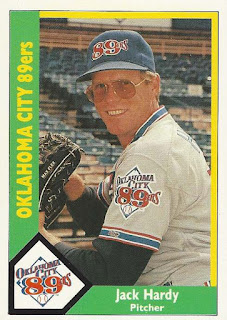 Jack Hardy had something to smile about when he appeared on card 151 of the 1990 CMC set. Unlike a lot of his Oklahoma City teammates, Hardy had already made it to the Major Leagues. The Chicago White Sox drafted Jack in 1981 and he spent eight long years working his way up the minor league chain. He spent most of 1989 at Triple A but did get a call up to the Big Show in May. He appeared in five games and pitched 12.1 innings for the ChiSox. Unfortunately, his 4.63 ERA and 1.541 WHIP did not impress and he found himself back at Triple A for the rest of the season. He made it though, and that is far more than most players.

Following the 1989 season, Hardy moved to the Rangers farm system. I'm not sure if Chicago released him or if he became a free agent. I can't find any record of a trade. However he got to the Rangers, they assigned him to Triple A for the 1990 season.

Jack appeared in 53 games for the 89ers in 1990, all in relief. He put up a respectable 2.34 ERA over the 88.1 innings he pitched. His 1.200 WHIP was a little more concerning and probably why he never got a call to Arlington. Hardy ended the season with a 5-4 record.

I'm not sure what happened after the 1990 season ended. Maybe Jack Hardy only signed a one year deal with Texas. Maybe the club decided a 30-year-old right hander with little Major League experience was not a good use of a Triple A roster spot. Maybe Hardy himself decided to go out on top. Whatever happened, 1990 would be Jack Hardy's last season as a professional baseball player.
Posted by Spiff at 11:15 AM