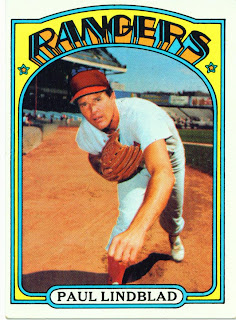 The Rangers go back into action tonight two games behind the first place Angels. Hopefully the guys can come out of the break firing on all cylinders. Supposedly Texas is talking to the Blue Jays about Roy Halladay. They are apparently a long shot. That doesn't bother me since I am still not sure about the idea of giving the Jays what they will probably ask for Halladay.

Since there isn't a lot to report, I decided to take another look at the 1972 Topps team set. As an aside, I just recently completed this set and am now planning on concentrating on 1973. Anyway, Paul Lindblad puts on an appearance today on card number 396. Paul appears to be punching the photographer. Perhaps that is why he was allowed to keep his cap on.

Paul joined the Senators in May of 1971 in the same trade that brought in Don Mincher and Frank Fernandez. Paul put up decent numbers out of the bullpen for Washington in 1971. That winter he made the move to Texas with the rest of the team.

In 1972 Lindblad would appear in a league leading 66 games and toss 99.2 innings. In that span he would post a 2.62 ERA and save nine games while finishing 33. The save to finish ratio wasn't necessarily a reflection on Paul though, he was 5-8 on the year. Being a Ranger pitcher in 1972 was just plain rough. The team lost 100 games and managed only 54 wins. Hard to get many save opportunities in that type of situation.
Posted by Spiff at 3:51 PM