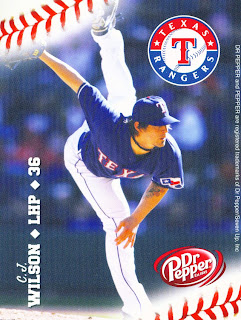 Wow! A lot has happened the last couple of days. Sorry about not posting since Tuesday. Seemed like every time I started to post something would come up. Ok, on to the Rangers.

Wins on Tuesday and Wednesday put the Rangers out in front of the Angels by one game. A loss last night dropped them back to only a half game ahead.

Tuesday was Josh Hamilton and Hank Blalock's night. Josh went 3-for-4 with a walk, a stolen base, and run scored. Hank managed 3-for-5 with a double and a run scored. Neither struck out all night. Texas won 8-5.

Wednesday was the Jones and Padilla show. Vicente Padilla went six plus innings and allowed only one run. He rang up four strikeouts and only gave up one walk. Meanwhile Andruw Jones was on a romp. He went 3-for-5 with one strikeout. The three hits were all home runs and he got four RBI out of the deal. Those performances were good for an 8-1 Angels beating.

Tommy Hunter came out of the game last night a winner. In six innings he allowed no runs on four hits. Not bad for a spot starter. Darren O'Day did his part with a scoreless seventh. The Rangers pitcher for the eighth was C.J. Wilson, shown here on his 2008 Dr. Pepper card. Wilson gave up a hit and a walk before allowing a three run homer. Seattle over Texas 3-1.

Off the field things are starting to gear up for the Mid-Summer Classic. Michael Young and Josh Hamilton were named to the All-Star team. Hamilton as a starter. Ian Kinsler lost out to Dustin Pedroia in the initial vote and to Brandon Inge in the vote for the final slot. He may still go though since Pedroia is considering withdrawing from the game due to his wife's difficult pregnancy. This afternoon Nelson Cruz was named to the team as an injury replacement for Torii Hunter. No Rangers' pitchers made the team.
Posted by Spiff at 3:59 PM

I can't believe that basically a year has gone by since last year's Home Run Derby. I still get shivers when I think about it.

Yes, I was bummed that Hamilton sat out this year's derby but it was probably for the best so as not to mess with his swing.