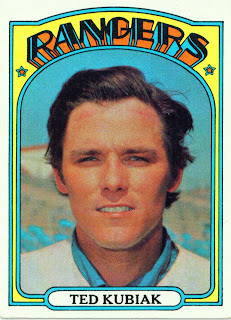 Texas was off last night but Anaheim won. That puts the Rangers a full game out of first going into tonight's action. Hopefully the guys can keep the winning going.

With the off night last night and no other Rangers news I decided to once again revisit the 1972 Topps set. Today we have card number 23, Ted Kubiak. The 1972 Topps Baseball blog has a pretty good write up on Ted here. Since it's much better than I normally do I will make a few comments and leave it at that.

46 games in 1972 would be the sum total of Ted's career with the Rangers. He managed a .205 batting average with no home runs. He had 12 walks and 12 strikeouts. He managed only seven RBI in his 130 plate appearances while scoring just five times himself.

Ted would be gone by July 20th of 1972 in a trade with the A's. Texas also sent Don Mincher and received Vic Harris, Marty Martinez, and Steve Lawson in return.
Posted by Spiff at 5:33 PM