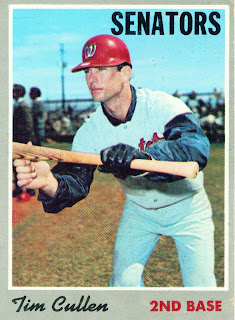 Ok, so after our quick look at 1969 we head to 1970. This season will also not last all that long either since I only have about four cards from this team set. To start off with we have Tim Cullen on card number 49 of the 1970 Topps set. Cullen looks like he might be practicing his bunting with a fungo bat. That with guys in suits standing around in the background looking at something else. Kind of makes the windbreaker under the jersey look ok.

Tim was the starting second baseman for the Senators in 1970. Of the 732.1 innings he played in the field 721.2 were at second base, the other 10.2 were at short. At second Tim handled 476 chances during the season while committing only three errors. His .994 fielding percentage was well above the league average .979.

Tim was the prototypical light hitting middle infielder though. His average in 301 plate appearances was .214 and his on base percentage was .301. He walked 31 times while striking out 38 times. He scored 22 runs and bumped in 18 RBI. Tim had only one home run on the season while managing 10 doubles and two triples. He had only two sacrifice bunts all season, even with the practice.

Cullen's 1970 season could be summed up as all glove and no bat. He seemed to sparkle in the field but his offensive numbers were at the bottom of the starting lineup. Maybe he should have practiced more than just bunting.
Posted by Spiff at 5:04 PM