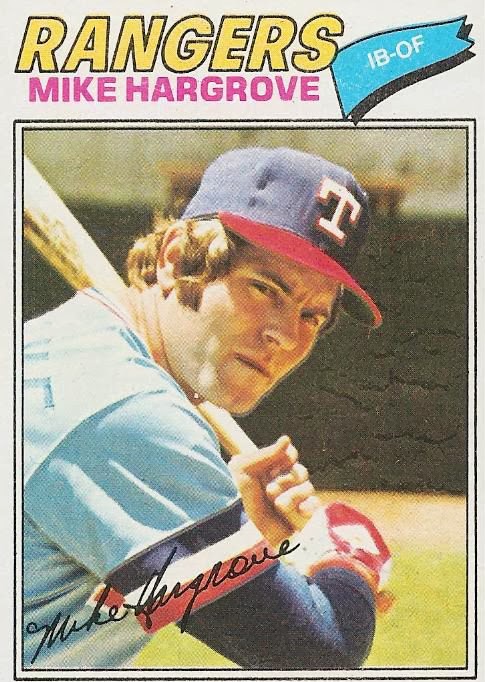 Mike played 1288.1 innings over 152 games at first base. It was the only position he played in the field for the Rangers in 1977. I have no idea where Topps came up with the outfield position on this card, Hargrove hadn't played in the outfield since 1975. He would commit just 11 errors in 1977, ten less than the previous season in almost 30 more innings. That led to a .993 fielding percentage, a nine point improvement over 1976 and three points higher than the league average. Success on the defensive front.

On offense Hargrove made 648 trips to the plate in 1977. He posted a .305 batting average and a .420 on-base percentage. Both of those numbers led the team and were significant improvements. Mike also used his 18 home runs, 4 triples, and 28 doubles to bump his slugging percentage up to .476. All nice numbers and a definite improvement. Success on the offensive front.

1977 had been a good year for Mike Hargrove. His bat looked to have returned and he had closed up at least a few of the holes in his glove. He probably wasn't going to face any serious challenges for the first base job for at least another year. Apparently part of Mike's offensive success was due to Baltimore Manager Earl Weaver. In July Weaver suggested to Rangers skipper Billy Hunter that he consider using Mike as a lead-off hitter. On July 15th Hunter did just that and left Hargrove there for the rest of the season. From that point on Mike compiled a .445 on-base percentage. Of course he only stole two bases all year long and got caught five times, but I guess Texas decided they could do without the speed if they had a runner regularly on base.
Posted by Spiff at 11:43 AM