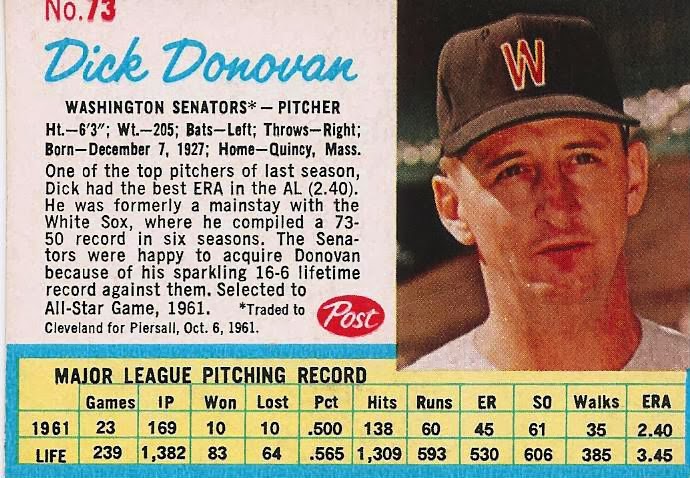 Going to kill two birds with one stone here. Today we have Dick Donovan appearing on card 73 of the 1962 Post set. He'll be filling the dual role of Senators Saturday and being number 36 on T.R. Sullivan's list of the Top 50 Seasons in Rangers history.

A quick comment on today's card before we go too much further. This card is the perfect example of the dangers of food company employees who don't know baseball writing copy for baseball cards. "The Senators were happy to acquire Donovan because of his sparkling 16-6 lifetime record against them." Really? The Senators grabbed Donovan in the 1960 expansion draft and hadn't played a game yet as a franchise when he first donned the Washington uniform. Pretty impressive that he was able to compile a 16-6 record against a team that he joined as part of its inaugural squad. Now, if you were going to run up against the Twins, he was probably your man.

Anyway, on to the main point of the post. Donovan's 1961 season has been covered but a recap is in order. Donovan made 22 starts and one relief appearance for Washington in 1961. He pitched a total of 168.2 innings and ended the season with a 10-10 record. That was more of an indicator of how much he wasn't supported than anything else. Dick's 2.40 ERA and 1.026 WHIP led not only the team but also the league. He walked just 35 batters while striking out 62 for a 1.77 strikeout to walk ratio. Not bad for anyone but especially impressive for a pitcher on an expansion team. The performance garnered Donovan a trip to the All-Star game and some MVP consideration. It also raised his trade value and helped the Senators move him in October of 1961 in an attempt to improve the club.
Posted by Spiff at 8:36 AM