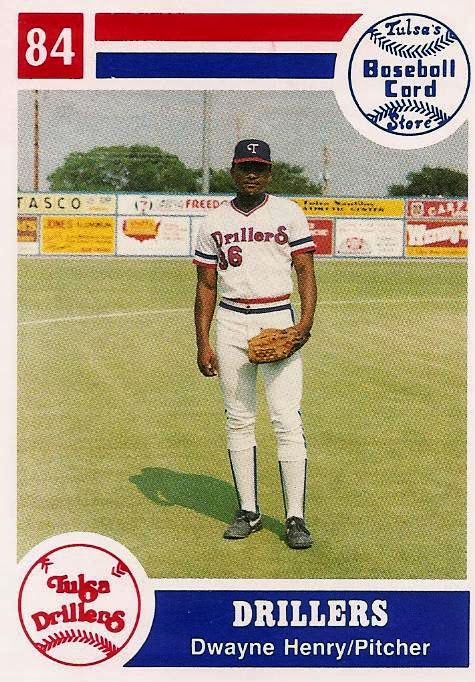 Going to take a break today from the 1990 Star Charlotte Rangers team set. This break is brought to you by Tom over at The Angels, In Order. Tom emailed me a couple of weeks ago asking if I was in need of a few Rangers cards he had. I was but didn't have anything new on the Angels front to trade. In typical Tom fashion he replied that was fine, he would just send them my way anyway. In they came late last week, and there were more cards than Tom mentioned. Among the extra goodies was this 1984 Tulsa's Baseball Card Store card of Dwayne Henry. It's #36 in the set and is now the oldest Rangers minor league card in my collection. Thanks a ton Tom! I'll be sure and keep an eye out for Halos for you.

Dwayne Henry was a second round draft pick for the Rangers in 1980. By the start of the 1984 season he had only made it up to Double A. That's not good progress over three seasons in a pitching-starved organization. Henry struggled at both Rookie and Double A ball in 1983 but the Rangers still had hopes for him. He began the 1984 season at Double A Tulsa.

Henry made 33 appearances for the Drillers in 1984, 12 of those were starts. He ended up with a 5-8 record. His 3.39 ERA and 1.471 WHIP were not dazzling but they were a significant improvement over the previous season. Dwayne's career seemed to be back on track.

As mentioned above, the Rangers were pretty desperate for pitching in the 1980's. Henry's improvement caught the eye of the front office and he got a bus ticket to Arlington when the rosters expanded in September. He made his Major League Debut on September 7, 1984 with an inning of scoreless relief to finish off a game the Rangers had already lost. Unfortunately, the rest of Dwayne's cup of coffee with the Big Club didn't go as well. In a total of 4.1 innings pitched, he allowed four earned runs for an 8.31 ERA to go along with his 2.769 WHIP. A lot of those numbers were due to the seven walks he issued.

The Rangers needed pitching but not that bad. Henry would start the 1985 season back at Double A.
Posted by Spiff at 5:14 PM

I always thought that was a pretty cool card but never had a use for it. Glad you like it.