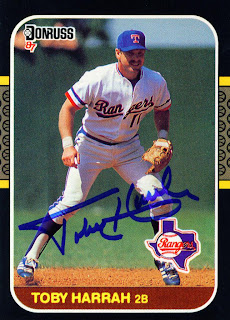 Number 14 on T.R. Sullivan's list of the top 50 Bizarre Moments in Rangers history involved one of the best teams Texas has ever fielded. The 1977 Rangers were quick, had some power, and had a little pitching. They put it all together to notch 94 wins - third best in team history.

On August 27th they were in New York playing against the Yankees. By the top of the seventh inning Texas had a 4-2 lead. Ken Clay was on the mound in relief for the home team as Claudell Washington led off with a ground out to second base. Designated hitter Willie Horton then singled. Sandy Alomar ran for Horton. Dave May singled. Runners on first and second as Toby Harrah came to the plate.

Harrah, shown here on a signed 1987 Donruss card, launched a ball deep to right field. Not deep enough to leave the park but deep enough to evade Lou Piniella. As Sweet Lou scrambled for the ball, Alomar and May scored. Toby kept running and came in as well. Inside the park home run! Three runs at that.

Up next was Bump Wills. Wills sent a ball deep into center field. Once again it wasn't deep enough to leave the park. Once again it got past the Yankee fielder - this time Mickey Rivers. Wills had speed, lots of it. Rivers had a weak arm. Not a good combination for Ken Clay and the Yankees. A second inside the park home run! Back-to-back jacks with a twist - neither ever left the field of play.

That was it for Clay as he was pulled immediately after Wills' homer. It was also it for the Evil Empire that day as the final score went down 8-2. Half of the Rangers runs had come on inside the park home runs.
Posted by Spiff at 4:16 PM