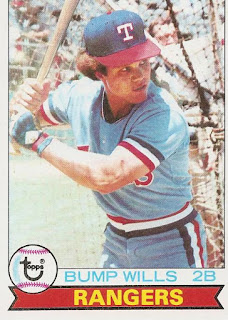 Bump Wills, shown here on card 369 of the 1979 Topps set, was looking to recover from the sophomore slump he encountered in 1978. The Rangers certainly expected a rebound.

Wills still had the starting second baseman's job nailed down. He played 144 games at second, down ten games from the previous season. He also pinch-hit in two games to bring his season total of games played to 146. Bump logged 1269 innings at second and committed 20 errors. His resulting .976 fielding percentage was two points lower than the league average. That was understandable in light of Wills' range being significantly greater than other American League second basemen.

Bump made 617 trips to the plate for the Rangers in 1979 and posted a .273 batting average. That was a 23 point improvement from the previous season. His .340 on-base percentage was also an improvement, just nine points though. While Wills struck out 58 times, he also walked 53 times. He continued to be have a little power but his 21 doubles were probably more a result of his speed. The three triples and five home runs he tallied proved he was not a slugger. He was a table setter though and scored a team high 90 runs for the Rangers while bumping in 46 RBI. Once again he proved himself to be a stolen base threat as he swiped 35 bags. That was down from the 52 of the previous season but still the most on the club. The eleven times he got caught were a cause for concern however.

All in all, 1979 was an acceptable return season for Bump Wills. He brought his batting average up significantly and his speed was still well above the average player. He needed to watch the caught stealing numbers and it would be nice if his on-base percentage were a tad higher. Still, the Rangers had little to complain about with their second baseman. If he could keep turning in similar numbers he would be able to stave off any challenges for his job.
Posted by Spiff at 12:17 PM