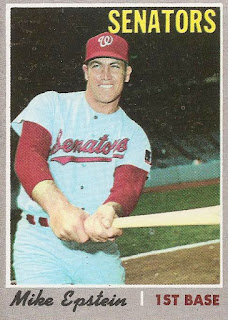 1970 was Mike Epstein's fourth season with Washington. He appeared to have the starting first baseman's job nailed down and was coming off an outstanding season in 1969.

Epstein, shown here on card 235 of the 1970 Topps set, appeared in a total of 140 games with the Senators in 1970. He made 517 trips to the plate and put up a .256 batting average. That alone wasn't all that impressive but his on-base percentage was .371, second only to Frank Howard in the starting nine. Mike helped his on-base percentage with his 73 walks. The 117 times he got rung up by opposing pitchers did not help. As you might guess from the number of whiffs, Epstein was a power hitter. He notched 15 doubles, three triples (tied for second best on the club), and 20 home runs (second to Big Frank) over the course of the season. He also scored 55 runs while bumping in 56 RBI.

Mike played in 122 games defensively for Washington, all at first base. He played 1044.1 innings and committed just 10 errors. That gave him a fielding percentage of .992, a point higher than the league average. Add in the fact that Epstein had more range than the average first baseman at the time and his defense appears more than adequate.

1970 wasn't a bad season for Mike Epstein but it hadn't been what he was looking for either. His defense had improved from 1969 and that was a positive point. However, Mike's offensive numbers had dropped across the board, with the exception of strikeouts. Not to terrible levels, but significantly from the previous year.  Since the Senators were starving for offense, Epstein probably wasn't going to be shipped out in the off-season. The front office had their eye on him though and he needed to get his production cranked back up if he wanted to avoid being traded before his value dropped too far.
Posted by Spiff at 10:51 AM