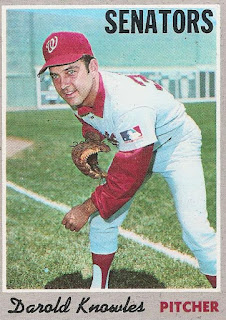 Darold Knowles, shown here on card 106 of the 1970 Topps set, was coming off a great 1969 season. He had served as the Senators closer and made a trip to the All-Star game. Washington was counting on Darold to continue to anchor the back end of the bullpen in 1970.

Once again in the closer role, Knowles appeared in 71 games for the Senators. That was by far the most appearances of any pitcher on the staff and 18 more times than he took the mound in 1969. Darold's 119.1 innings pitched were also a big increase from the previous season but came in second to Jim Hannan in the bullpen. To be fair, Hannan was more a swingman than a true reliever.

Knowles lowered his ERA twenty points from the previous season to 2.04 but his WHIP climbed 91 points to 1.324. He struck out 71 while issuing 58 free passes. Darold notched 27 saves, up 14 from the year before but ended the season with a 2-14 record.

1970 was a puzzling season for Darold Knowles. His ERA and saves both moved the right direction but his WHIP was concerning and the number of losses he incurred was downright alarming. Knowles had the stuff and Washington wasn't done with him. He was being watched though and needed to bring his A game to Spring Training in 1971.
Posted by Spiff at 12:25 PM