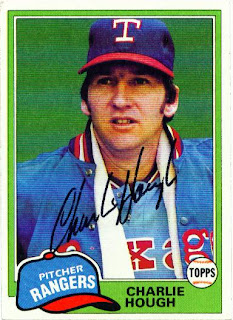 Making up for yesterday, we dip into the game-used and autographs box. Out comes a 1981 Topps card, number 371 in the set. I picked this card up off Ebay in a lot of signed Rangers cards.

Charlie was an integral part of the Rangers rotation for several years. Throwing a baffling knuckleball he was the perfect mix with Nolan Ryan once Texas signed The Express. Charlie holds the lead for most wins, innings pitched, complete games, games started, and strikeouts as a Ranger. He is in the top five in shutouts and games appeared in. He also is first in hit batsmen. Guess that knuckleball went where it wanted, not always where Hough told it to go.
Posted by Spiff at 10:07 AM

My brother-in-law says that Hough threw a pitch called the butterfly, or maybe it was the butterfly knuckleball, or some such. Is this correct?

I have heard the knuckleball called the butterfly pitch because of the way it moves. He might be referring to that.

I guess throwing all those knuckleballs saved Hough's arm. He has a nice signature.