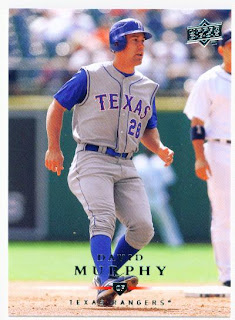 Pudge left the game right away. Murphy played another inning before the adrenaline wore off and he decided he had better follow Ivan's example. Pudge is fine, Murph's out two to four weeks with a strained ligament in his knee.

I really hope that this doesn't derail David's chances at the Rookie of the Year award. He seems like a good young player with a decent attitude. He plays aggressively and has developed into a pretty potent threat at the plate. The Rangers are going to miss this guy the next few weeks.
Posted by Spiff at 3:53 PM