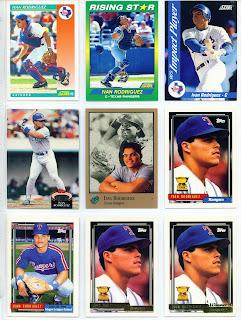 Ivan on Monday again and here we go with page six in my first Pudge book. I must say that we are covering more ground this way rather than one card at a time. Anyone have any feedback or suggestions?

Anyone remember the 1992 Topps Gold issue? The first year that Topps brought out the concept and it took off like wildfire. Some dealers were charging up to $5 for a common gold. You could get your gold cards as inserts or through getting so many points saved up from contest cards. The redeemed cards came with the winner stamp on them.

As far as card backs go, I gotta say I like the Studio card best in this bunch. Lots of interesting information. What other set will tell you what a player's wife's name is or who he likes to see in a movie? Good card.
Posted by Spiff at 3:59 PM