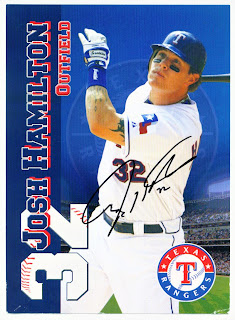 Well, we made it to Kansas City and back last night and saw the Rangers take out the Royals. Had a good time overall. Spiff Jr. was also observing his birthday (not the reason for the trip, just coincided) and declared it worth missing birthday cake.

A week ago last Sunday Spiff Jr. and I took in a game in Arlington. He was given this oversize Josh Hamilton card as part of a Jr. Rangers promotion. We took it along with us to KC and sure enough, Josh was signing. The little man handed it over (getting a small Sharpie mark on it in the process) and Hamilton signed it. Not a bad score for a four-year old. I also got a 2008 Upper Deck card signed but the signature got smudged. Not sure if Hamilton or I did that as he was handing it back to me.

Going to two games fairly closely allowed me the opportunity to compare The Ballpark in Arlington to Kaufman Stadium. Interesting comparison. Both ballparks are undergoing renovation. Texas in the parking lots and KC on the stadium itself. Both teams are out of contention.

Parking was easier in Texas. Not as many parking lot attendants but less confusing. Texas had more numerous fans. Even with a bigger park and 360 degree seating, Arlington seemed to be more filled with fans. Kaufman had a few spots of density but overall was pretty sparse. More security and cops at KC.

Parking was cheaper in KC. As we walked in we had to have our bags checked. No soda we were told. I had called on Saturday night and spoken to a Royals operator who assured me repeatedly that pop was ok to bring in. The security personnel agreed that a lot of people had been saying that they had been told that. Mrs. Spiff ran the drinks back to the car. In Texas the security folks just look at your Dr. Pepper and tell you to have a nice game.

As we entered the stadium I noticed the smell, not a good one. Not sure what it was but it wasn't good. Never encountered that in Texas. Access to the players for any autograph seekers is great in both parks.

I have thought several times that Texas should add a second video board to ensure that everyone in the park can see at least one board. KC has a huge "megatron" that the entire park can see. It is almost too big. The sound is definitely too loud. I have had to yell to be heard in Texas over the other fans but never over the PA.

I had several other observations but this post is already way longer than normal. I'll sum up by saying that both parks are enjoyable but Texas manages to win overall on several fronts.
Posted by Spiff at 11:11 AM

Nice pickups on the autos! Unidentifiable smells are definitely a downer for any event.