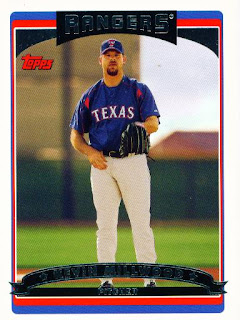 Two straight complete game wins for Kevin Millwood that is. Here is Millwood on his 2006 Topps card, number 485.

After beating Tampa Bay 9-1 in his last start Kevin came back last night and beat Kansas City 2-1 in nine innings. Coming on the heels of Scott Feldman's seven inning run the night before, this start should have given the bullpen some time to catch their breath.

It is nice to see pitching like this from a Rangers starter. That's what the team needs if they are to be a serious contender at some point. It's just too bad that Millwood had some problems earlier in the year and couldn't throw this way the entire season. Perhaps if the starting staff ends this season on a high note and gets shored up some during the off-season we will still be talking October in August of next year.
Posted by Spiff at 12:00 PM