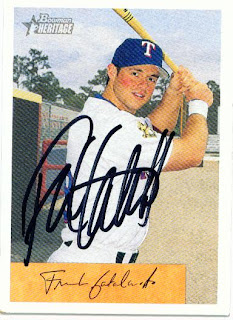 This arrived in the mail today. On July 12th I had sent out two of these 2002 Bowman Heritage cards to Frank Catalanotto. I asked him to sign one and told him to keep the other if he wished. He signed both and returned them. Strangely, one of them had a paper clip on it. This is the better-looking of the two.

Four days ago I got back a couple of cards that I had sent to Gabe Kapler back in May. The cards both pictured him in a Rangers uniform and I told him to feel free to keep one of those as well. He also signed and returned both along with a business card from his charity to fight domestic violence. Worthy cause.

Both Frank and Gabe appear to be class acts and I appreciate their generosity. I have fond memories of sending cards to various Texas Rangers in the late 80's and early 90's. Getting signed cards returned was always a thrill. Seems that times haven't changed as much as I had feared. There are still ballplayers who care about the fans and receiving their autographs in the mail is still as much fun as it was.
Posted by Spiff at 4:03 PM

That is very cool! I've never sent cards off to be auto'd, but your success is making me think differently...

Thanks for the comment. I sent a couple (in Rangers uniform) off to Travis Hafner care of the Indians earlier this year. I will let you know how that one comes out as well.