Was it really him? 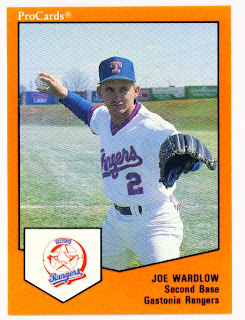 Today's card is number 998 in the 1989 ProCards set. If you read this blog at all often you may be asking yourself why I am once again posting a card of Joe Wardlow. Why post a second card within one month of a guy who never made it to the majors? Well, there is a reason.

Eleven days after my post on Joe's 1990 Best card, a comment appeared. Left by an anonymous writer, the comment answered some of the questions I had about Wardlow's career. The visitor ended his remarks by stating that he was Joe Wardlow and wanting to know how to purchase the card I had posted.

Needless to say I was pretty thrilled. I would have never imagined one of the subjects of my posts responding. I immediately dug through my Ranger doubles and unearthed a second 1990 Best Joe Wardlow card. I then responded to the comment.

Here we are another eleven days later and there has been no response. Kind of leads me to repeat the title of my previous Joe Wardlow post, what ever happened to that guy? So, was it really Joe Wardlow who replied to my original post or just a practical joker pulling my leg? What do you think?
Posted by Spiff at 4:37 PM

There is no way to check the email he posted under??

BTW, I just got your AWESOME package. I am working on the post right now.

Since he posted as "Anonymous" there is no email required by Blogger. At least none that I can find a way to check.

Thanks for letting me know you got the cards. Hope some of them can fill some holes in your collection for you.

i know what happened to joey wardlow beacause i know him...he...shhhhhhhh if you realy want to find out E-mail me at puchi_xx3@yahoo.com thxx mwuahhh!!