Dodgers even series with Phils. 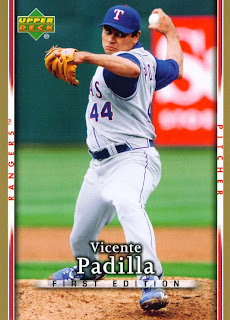 Vicente Padilla, seen here on his 2007 Upper Deck First Edition card, pitched 7.1 innings tonight in L.A. and only gave up one run. Amazingly enough he also hit no batters. What's wrong with this guy? Anyway, that performance was enough to get him a no decision as the Dodgers rallied in the eighth inning to down the Phillies 2-1. Chan Ho Park gave up the winning Dodger run. I wonder if the team is rethinking his addition to the NLCS roster. The series is now tied at one game apiece and the teams will be heading to Philly tomorrow.

On the other coast, the Yankees are currently leading the Angels 4-1 in the seventh inning. Anaheim has to win one in New York if they want to take the ALCS.
Posted by Spiff at 9:39 PM