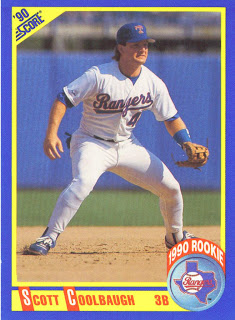 So hitting coach Rudy Jaramillo turned down the Rangers offer for next year and will be leaving the organization. Rudy has been with Texas for 15 seasons and is regarded by many as one of the best hitting coaches in the Bigs. He wanted a multi-year contract though and Texas only offered one year so he is hitting the road.

Now comes the sweepstakes as to who might replace him. Current first base coach Gary Pettis has been mentioned, as have former MLB hitting coaches Thad Bosley (a Ranger in 1989 and 1990) and Gerald Perry.

It seems that Scott Coolbaugh might also be a possibility. Coolbaugh, seen here on card number 612 of the 1990 Score set, is currently the OKC Redhawks hitting coach. Some credit Scott with turning Chris Davis around when he was sent down to Triple A this season. Others say it was just the change of pressure that did the trick.

Two things are certain. One is that the Rangers need a new hitting coach. The other is that it will be interesting to see what happens and who ends up with the job.
Posted by Spiff at 9:39 PM