The kids are staying up late (in the season). 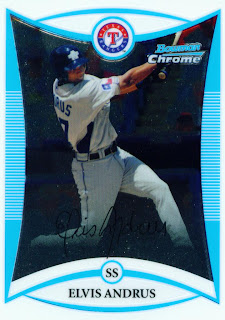 So, Mike Scioscia says the Rangers had a good year and will be a team to be reckoned with for at least the next few years. Good to hear that kind of praise from a manager who obviously knows what he is doing. Scioscia's prediction of continued success in Texas probably comes in part from his observations of the younger players on the team.

Elvis Andrus appears to be part of the Rangers' next few years. Elvis, shown here on card number BDPP89 of a 2008 Bowman Chrome issue, has been busy all year making an argument for his continued employment. Last night against the Angels he continued his case. Elvis went 2-for-5 with a run scored and two RBI. One of those hits was a double. He also worked a walk and swiped his 33rd base of the season.

Chris Davis was the other Ranger who had a big night and another who hopes to figure big in the near future. Davis went 3-for-5 at the plate with a run scored and three RBI. One of his hits was a home run off Anaheim starter John Lackey. If Davis can keep his offense running next year he should be a lock at first with his Gold Glove level defense.

Nice to see those two performances even this late in the season. Stuff like that can help keep winter's chill at bay.
Posted by Spiff at 6:25 PM

Outside of the financial issues in Texas, the Rangers seem like a team on the verge of very big things in the near future. I sincerely hope the Rangers and Angels can nudge out an Eastern team each year and both make the playoffs.

That would indeed be an awesome post-season. The West finally coming into it's own.

I'm optimistic about next season.