Then there were five. 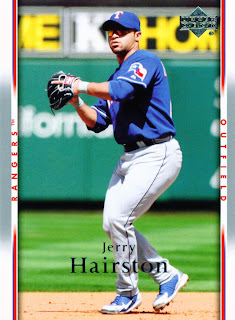 The Twins and the Red Sox joined the Cardinals at home on Sunday night. Literally and figuratively. Both teams were back at home in their series and both were eliminated at the end of sweeps. This leaves five teams still alive in the playoffs. Three sweeps in four series. Been kind of a boring post-season so far.

So now the Yankees are slated to face off with the Angels in the ALCS while the Dodgers still await the outcome of the Phillies/Rockies series. Philly managed a win last night to take the lead in the series 2-1 and are leading the Rockies 2-1 in game four right now. Anything could happen though.

As the Yankees finished up their sweep of the Twins Jerry Hairston was sent in to pinch run for DH Hideki Matsui. Jerry, shown here on card number 222 of the 2007 Upper Deck set, didn't do anything spectacular. He didn't even score a run. What he did do was make his post-season debut. After 14 Big League seasons and over a thousand games played he finally made it. Sorry you had to do it as a bad guy Jerry.

So, who are you liking in the League Championship Series? For the ALCS I am going to have to pull for the Halos. Hope they have the juice to down The Evil Empire. Seeing them win and the Dodgers take the NLCS would be cool it seems. A freeway series for the first time would be something to see.
Posted by Spiff at 7:08 PM

Angels/Phillies! The Dodgers have gotten on our nerves.

I can see where that might easily happen. I can live with a Phils/Halos match-up. The N.L. team is up for discussion but not the A.L. team.