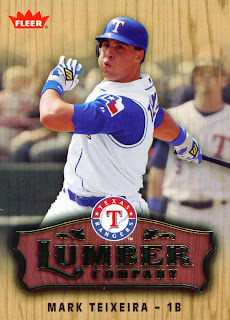 So the Twins and Cardinals are dancing on a razor edge right now. Both are two games down in their best of five series. At least both are headed home rather than to their opponent's parks.

New York's win tonight over the Twins was almost all former Rangers. Alex Rodriguez picked up three RBI while Mark Teixeira picked up the fourth to conclude the Bombers' scoring. Teixeira, pictured here on card number LC-18 of the 2006 Fleer Lumber Company subset, managed to knock a walk-off homer for the Yanks in the eleventh inning. Final score, 4-3 in favor of The Evil Empire.

Right now the Angels have just taken a 2-1 lead over the Red Sox in the seventh inning of game two of their series. With their first game win it seems that the Halos have finally figured out how to handle the BoSox in the post-season.
Posted by Spiff at 10:46 PM