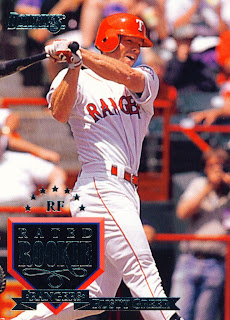 The Rangers announced late yesterday that they are down to four finalists to replace Rudy Jaramillo as hitting coach.

Rusty Greer, shown here on card number 513 of the 1995 Donruss set, is probably the fan favorite but is likely the dark horse of the bunch. Rusty was a Ranger from 1994 to 2002. He played his entire career for Texas and was wildly popular with the fans. He also managed a career .305 batting average with a .387 on base percentage. Rusty has never been a hitting coach though and has never coached above the college level.

Clint Hurdle is interested in the job after getting fired as manager by the Rockies early this season. Before becoming Colorado's manager Clint was their hitting coach from 1997-2002.

Thad Bosley was the A's hitting coach from 1999-2002. This would have been at the same time Ron Washington was on the Oakland coaching staff. Bosley has a Rangers connection after logging the final two seasons of his career with them in 1989 and 1990.

Gerald Perry is the fourth candidate. He has been a hitting coach since 2000 for a total of four different teams. He is looking for work after getting sacked by the Cubs in June.

So it's down to the final four. These guys will all get face-to-face interviews. Who will get the job? Any thoughts?
Posted by Spiff at 6:57 PM