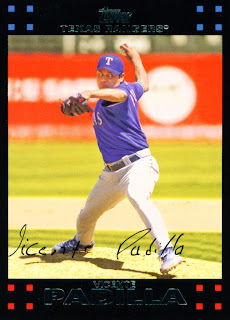 It pains me to post this 2007 Topps Texas Rangers card of Vicente Padilla. To post card number TEX6 in this set is to post a card of one of the former Rangers that I was least upset to see go. I have to do it though in order to give credit where credit is due.

Vicente pitched seven scoreless innings tonight to send the Dodgers to a first round sweep of the Cardinals. Amazingly Vicente didn't hit any batters and seemed to cause no problems with his teammates. If he could have done that for Texas he might have been in the playoffs with a different team.

One team out of the playoffs but there should be three more joining them soon. Just too bad the Cardinals had to go first.

As an aside, the Phillies/Rockies series is tied up at one win apiece and game three was delayed until tomorrow due to snow. That means that the Dodgers will have to wait several days before their opponent in the next round is decided. It also means that opponent will likely have a shorter layoff between series. Will this lull work to the Dodgers' advantage or disadvantage? Why?
Posted by Spiff at 8:40 PM

It is painful but its hard to compare. The NL is clearly inferior to the AL. Not sure why the NL wins the World Series. They can't win an All Star game.