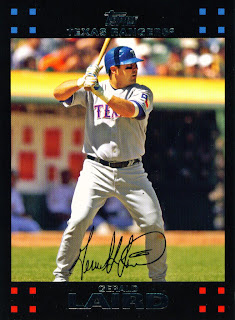 So the Tigers gave the Twins a run for their money but just couldn't quite get it done. In 12 innings of great ball Minnesota managed to edge Gerald Laird's Tigers 6-5 to take the A.L. West title. That gives the Twins a date tomorrow in the Bronx against the Yankees. Good luck against The Evil Empire guys.

Looking at the comments to the previous post I see that most of you were pulling for the Twins with Frank being the lone Tiger vote. Jim came eerily close to an exact prediction of the outcome. He got the walk-off single right but predicted Nick Punto rather than Alexi Casilla. Wow Jim, if the old crystal ball hadn't been a little foggy you would have nailed it.

As for Laird, shown here on card number 412 of the 2007 Topps set, he had a terrible night tonight. 0-for-6 at the plate with two strikeouts and grounding into a double play. The ten runners he left on base in a one run loss must rankle. Gotta feel bad for the guy.

Three of the four division series take off tomorrow. A quick scan of the rosters involved shows former Rangers on at least six of the involved teams. That means I should be able to post cards relevant to the games most of the time.

Looks to be a great post-season. Is there one team that you would like to see get swept out of the first round? Who and why?
Posted by Spiff at 9:54 PM

I'd love to see the Yankees and Rockies get swept (and the Cardinals, of course). I don't believe any of that will happen.

You better believe I was pulling for Punto to get the walk-off hit! Obviously, I'd love to see the Rockies get swept.