Young, Berkman hang up the spikes. 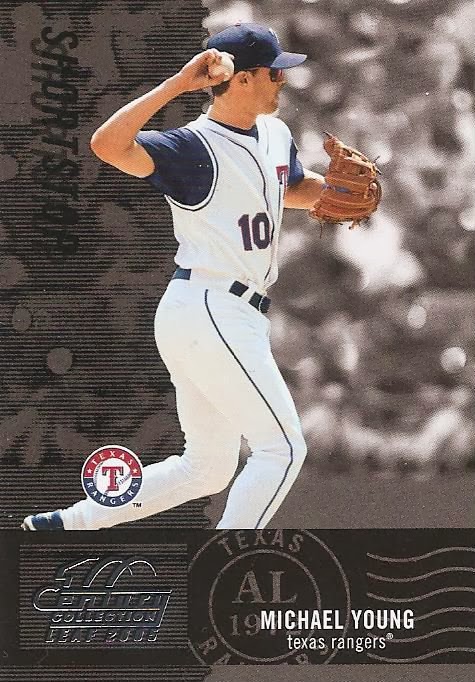 Michael Young, shown here on card 110 of the 2005 Leaf Century Collection, is slated to meet with the press this afternoon. The press conference will take place at Rangers Ballpark in Arlington and Young will appear as a member of the Texas Rangers. He will be announcing his retirement from Major League Baseball as an active player. After 14 MLB seasons Michael is hanging up the spikes.

Young spent all but one season of his career with the Rangers. He reportedly had contract offers from the Dodgers and Brewers on the table should he have wanted to continue playing. Apparently he decided it was time to go.

Michael was a workhorse for the Rangers. Since becoming a full-time player in 2001 he averaged 151 games a year for the club. He played through injuries and won fan hearts with an early career position move to accommodate prima donna Alfonso Soriano. Unfortunately he later became that prima donna himself and cried considerably over switching positions late in his career. Part of that crying was to publicly ask for a trade. It took a season or two but Texas obliged by trading him before the 2013 season. If it hadn't been for Michael's complaints, he likely would have played his final season for Texas. Even while complaining Young kept up his work ethic, making successful switches to third base and then to an everyday utility player.

Young retires with a career .300 batting average and .346 on-base percentage. He has 1137 runs scored, 1030 RBI, 441 doubles, 60 triples, 185 home runs, and 90 stolen bases to his credit. He's been an All-Star seven times, won the All-Star MVP once, the American League batting title in 2005, and was awarded one Gold Glove. He leads the Rangers for all-time numbers in most offensive categories.

Truly an impressive career. Hall of Fame? Maybe, the voters will decide in five years.

Yesterday former Ranger Lance Berkman also announced his retirement as a player. Berkman played 15 seasons in The Majors but just one with Texas. His retirement is not a surprise since he battled through the last part of last season with injuries and talked about hanging it up. Since he spent the majority of his career with other teams I'm going to skip the recap of his career. Lance is another player who will get Hall of Fame consideration but might be on the bubble.
Posted by Spiff at 12:02 PM