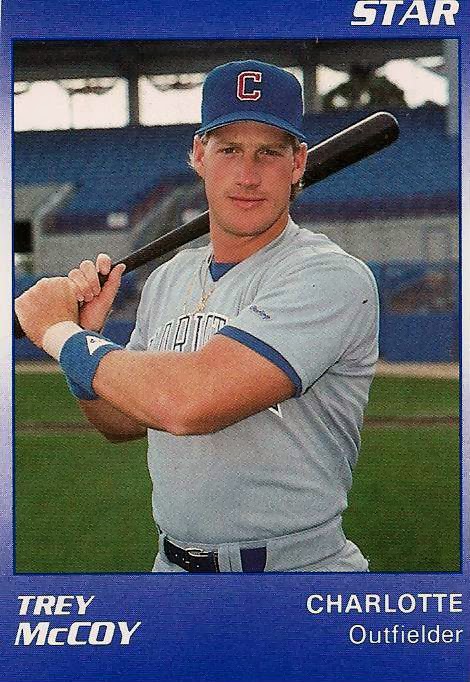 I'm going to say up front that card number 13 in the 1990 Star Charlotte Rangers team set is probably the most mis-cut card in the set. I know the scan of Trey McCoy's card looks bad. It's a great improvement over the card in person.

The start of the 1990 season was a continuation of Trey's sojourn at Single A Gastonia. He spent the 1989 season there as well. In 24 games at Single A McCoy batted .338 with a .415 on-base percentage. He bopped six doubles and four home runs for a .563 slugging percentage. He also walked as often as he struck out - 12 times each. In addition to his offense, Trey managed to play 16 games in the outfield without committing an error.

That performance got McCoy a mid-season promotion to A+ ball. He would play in 45 games for the Charlotte Rangers and get 184 plate appearances. As might be expected following a promotion, Trey's numbers dropped. His batting average tumbled to .231 and his on-base percentage to .332. His 11 doubles and three home runs weren't enough to keep his slugging percentage from dropping to .356. With the improved pitching Trey saw his strikeouts total up to 35 while his walks came to just 23. Trey also committed two errors in 34 chances in the outfield for Charlotte. That gave him a .941 fielding percentage.

Trey McCoy started the 1990 season like a house afire. He cooled off following his promotion to A+ ball but apparently the Rangers liked what they were seeing. His glove had improved tremendously and his bat seemed to be able to catch up once he was given the chance to adjust. He would have the chance to make more adjustments in 1991 when he started the season with the Double A Tulsa Drillers.
Posted by Spiff at 11:53 AM