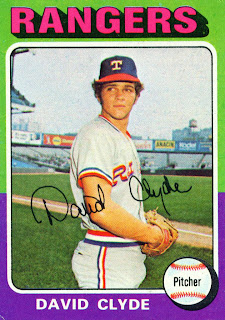 Ok, the 2011 season is over. Time to move on with the off-season posting. Back to past Rangers on Topps Tuesday.

1975 was a rough year for young David Clyde, shown here on card number 12 of the 1975 Topps set. After his straight from high school debut in 1973 he was actually able to improve in 1974. Not enough though.

The Major Leagues are not a learning environment and in 1975 the Rangers finally did what they should have done with David back in 1973, sent him to the minors. Clyde would spend most of the season with the Double A Pittsfield Rangers. In 161 innings he posted a 3.07 ERA.

David also got one start with Texas in 1975. He went seven innings and gave up three runs for a 2.57 ERA and the loss.

At just 20 years of age, Clyde was still considered a valuable prospect and the Rangers were looking forward to his continued improvement. Sadly that didn't happen. David would spend two more years struggling in the minors before being dealt to Cleveland in February of 1978.

Although the Rangers reacquired him in January of 1980 they released him in March of the same year. The lone game in 1975 would mark the last time the once highly touted phenom would pitch in a Rangers uniform.
Posted by Spiff at 7:40 AM

Clyde is a class act. I interviewed him for over an hour a couple years back. He was so positive and funny. It was a great experience.

He's a great story and it would have been nice to see him get to develop from the start instead of being thrown right into the fire.

Truly a nice guy, tragic story, and stupid move on the Rangers part. That's probably why I find him so compelling.