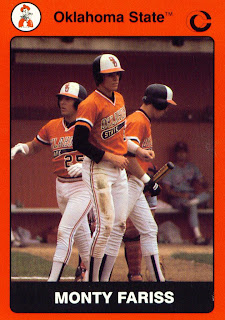 Card number 75 in the 1991 Collegiate Collection set features Monty Fariss during his time with Oklahoma State. Monty had been drafted by the Yankees in the 7th round of the 1985 draft but declined to sign and went to college instead. He would play three seasons for the OSU Cowboys from 1986 to 1988.

Each year in college Fariss got significantly better. The only areas he went the wrong way in were walks and doubles. His college career ended with a .330 batting average, 65 home runs, 45 doubles, 247 RBI, and 224 walks.

In 1988 the Rangers drafted Monty in the first round as the 6th pick overall. He signed with them and headed off to Butte, Montana to start his pro career with the Copper Kings in the Pioneer League. Apparently the three years of college ball had paid off for him.
Posted by Spiff at 3:41 PM