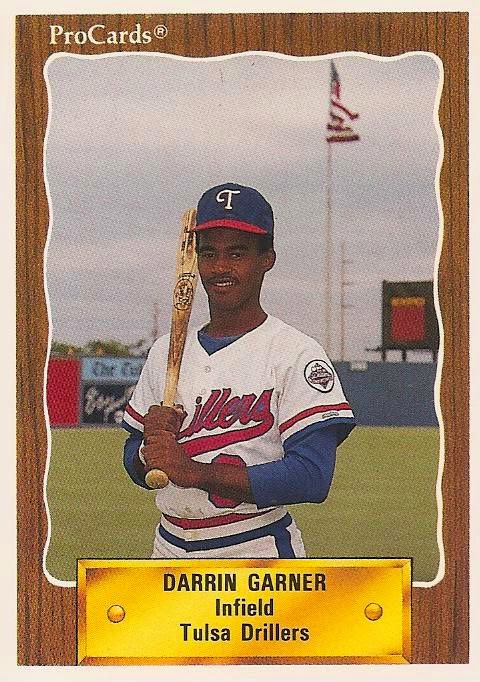 Darrin Garner, shown here on card 1162 of the 1990 Tulsa Drillers set, was a seasoned minor league vet by the time this card come out. He was drafted by the Rangers in the first round of the June, 1985 draft. Five years later he was preparing to begin his second season with the Tulsa Drillers. That's a long, slow climb to Double A.

Darrin made 426 trips to the plate over the 107 games he played for Tulsa in 1990. He posted a .231 batting average and a .364 on-base percentage. The batting average was an eleven point drop from the previous season while the on-base percentage was 28 points higher. That's probably accounted for in part by the 42 walks Garner worked as compared to the 30 times he struck out. The six doubles and one triple demonstrated Darrin's lack of power. He did steal 11 bases but also got caught seven times.

Garner played second base for the Drillers in 106 of the games he appeared in, effectively making him the team's starting second baseman. He committed 15 errors in the course of the season and ended the year with a .972 fielding percentage.

Darrin Garner's 1990 season wasn't a bad one, for a second or third year in the minors. Six seasons in, it didn't look so good. His defense was passable but his offense clearly did not have the pop to get to the next level. Garner would start the 1991 season back at Single A with the Charlotte Rangers. It seemed just a matter of time before he gave up and ended his pro career.
Posted by Spiff at 8:58 PM