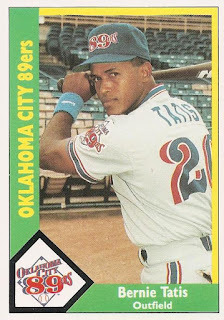 Let me say before I go any further in this post, I don't know if Bernie Tatis is any relation to former Ranger Fernando Tatis. I tried to research the question but was not able to find an answer. I do know that Bernie is giving us a nice view of the 89ers uniform number font on the front of card 170 in the 1990 CMC set.

Tatis began his pro career in the Toronto system at Medicine Hat in the Rookie League in 1981. He stayed in the Blue Jays system until the end of the 1987 season, never making it above Double A. In 1988 he played at Triple A for the Pirates and lasted part of the 1989 season at Double A before Pittsburgh let him go. He finished the season in the Mexican League. Texas decided to take a look at him and signed him prior to the 1990 season. He was assigned to Triple A Oklahoma City.

Bernie played in 55 games total for OKC in 1990. As the front of his card indicates, he played primarily in the outfield, 45 games all told, with a fielding percentage of .989. Tatis also made three appearances at second base where he was flawless and a cameo at third base where he flubbed the only chance he saw.

Tatis made 198 trips to the plate for the 89ers in 1990. His .198 batting average was below the Mendoza Line and his .260 on-base percentage wasn't too far above it. Those low numbers were due in part to the fact that he struck out 36 times while working just 18 walks. He did manage four doubles, two triples, and three home runs.

Apparently the Rangers didn't need a full season to see that Bernie Tatis was not going to work out for them. He ended the season at Double A in the Cleveland system. The Indians held on to him until the end of the 1991 season but he never got above Triple A with them either. From 1992 through 1996, Tatis played in the Mexican League. After a two year hiatus, he again played in the Mexican League during the 1999 season. That was it for him as a player. After 17 seasons in the minors, Bernie Tatis finally let go of his dream of playing Major League baseball.
Posted by Spiff at 7:53 PM