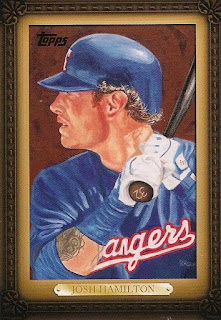 Last night in Arlington, Josh Hamilton faced a do-or-die moment. Hamilton, shown here on card WMDP26 of the 2008 Topps Wal-Mart Dick Perez set, had the day off. Well, most of the day. In the ninth inning, with the Red Sox leading 3-2, he got the call to pinch hit. There were runners on the corners and two outs. Josh was either going to tie or end the game. It was his first chance at a walk-off since rejoining the Rangers. Obviously the Sox thought they knew which way this would end, they had just intentionally walked Prince Fielder.

Hamilton swung at one pitch way out of the strike zone and I figured BoSox closer Koji Uehara had him in the bag. Not so. Josh lined a pitch from the former Ranger into the left-center gap for a double. Recent call-up Hanser Alberto scored easily from third. What was really strange was that Prince Fielder chugged his way around the bases to score from first with a head first slide into home. You do not want to get in the way of that train for sure.

On a down note, Adrian Beltre jammed his left thumb sliding into second base to break up a double play earlier in the game. He was placed on the 15 day disabled list today. About an hour ago the Rangers announced they will be purchasing the contract of prospect Joey Gallo from the Double-A Frisco Rough Riders and bringing him up to stand in for Beltre. This should be a good chance for Gallo to show management what he can do and give an indication if he will be able to live up to the hype or not. He won't be the defensive wizard Beltre is but he might be able to replace his bat in the lineup for a time.
Posted by Spiff at 6:59 PM