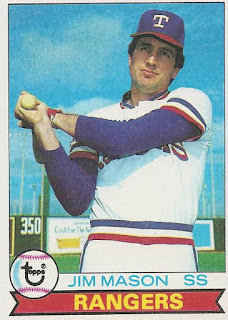 Before I get started discussing Jim Mason's 1979 season let me say I have always found card 67 of the 1979 Topps set amusing. The expression on Mason's faces seems to say he had much better things to do than pose for a baseball card photo. Perhaps he did.

This photo was taken during Mason's second stint with Texas. He broke into the Majors with the Senators in 1971 and stayed with the team for two more years before moving on to the Yankees before the 1974 season. He returned to Texas midway through the 1977 season.

In 1978 Jim was able to take advantage of Bert Campaneris' struggles with the bat and get some more playing time than expected. Mason's .190 batting average did not impress though and Texas decided he was not the answer at short stop. On December 8, 1978 Texas traded Jim Mason to the Montreal Expos for Mike Hart. Jim would play one final season in the Majors before being released by the Expos and ending his playing career.
Posted by Spiff at 3:00 PM