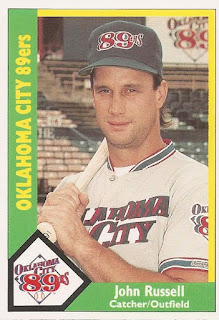 John Russell, shown here on card 161 of the 1990 CMC set, joined the Rangers organization as a free agent on May 7, 1990. He had Major League experience with the Phillies and Braves before coming to Texas and was released by Atlanta after refusing a minor league assignment following Spring Training.

Texas sent Russell to Triple A Oklahoma City following his signing. He played in six games for the 89ers in 1990 and made 24 trips to the plate. In that limited sample he hit .409 with a .458 on-base percentage. John walked twice and struck out three times while hitting four doubles and two home runs.

Russell caught in five of the six games he played for OKC. He made just one error to tally a .969 fielding percentage.

Six games is a pretty limited sample size but it was enough for the Rangers. On May 17, 1990 the Rangers purchased John's contract from the 89ers. He was back in the Majors.
Posted by Spiff at 11:31 AM