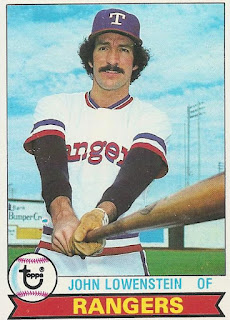 John Lowenstein, shown here on card 173 of the 1979 Topps set, came to Texas in February of 1978 as part of the trade that sent David Clyde and Willie Horton to Cleveland.

Lowenstein was blocked in the outfield and served primarily as a backup in 1978, appearing in just 77 games. Blocked in the crowded Rangers outfield, John got most of his action at third base behind Toby Harrah and as the designated hitter.

The Rangers were swamped with weak-hitting utility players and Lowenstein's .222 batting average during the 1978 season did not make him stand out from the crowd. Texas placed him on waivers at the end of the season and the Baltimore Orioles claimed him on November 27, 1978. He was gone before this card was printed.
Posted by Spiff at 1:30 PM