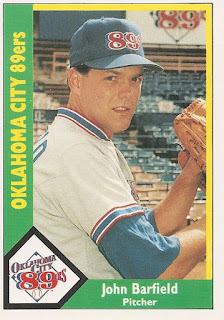 The Rangers selected John Barefield, shown here on card 159 of the 1990 CMC set, in the June phase of the 1986 draft. He worked his way up the farm system and was a September call-up in 1989. He appeared in four games for the Rangers that year and posted a 6.17 ERA over 11.2 innings pitched.

Numbers like that are not calculated to keep one in the Majors and Barfield was assigned to Triple A Oklahoma City to start the 1990 season.

In the course of 19 appearances John made three starts for the 89ers. The rest of his games were in relief. He pitched 43.1 innings and posted a 3.53 ERA and an 1.500 WHIP. His strikeout to walk ratio wasn't very impressive either as he walked 21 while striking out just 25.

It is probably more of a testament to the Rangers lack of pitching at the time than to anything else that they called Barfield up on May 29, 1990. He would spend the rest of the season with Texas and stay there in 1991 as well.
Posted by Spiff at 9:51 PM