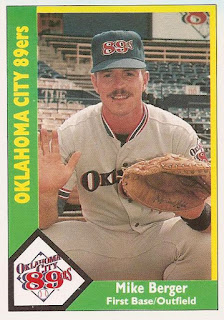 Card number 160 of the 1990 CMC set is a bit confusing. If you read the front of the card, Mike Berger is listed as playing first base/outfield. If you know anything about baseball you realize from the picture that he's in a catcher's crouch with a catcher's mitt.

I have no idea why CMC listed Berger's positions the way they did. He played outfield and first base for most of the first part of his career. Mike was a catcher in 1980 when the Pirates drafted him and returned to the position in 1989 with the 89ers.

The Rangers were Mike's third franchise (Pittsburgh and Montreal also had him in their systems), by the time he arrived he was experienced and could play a number of positions. In 1990 he played in six games in the outfield, 33 games at first base, and 38 games behind the plate for OKC. His .984 fielding percentage at first base was the highest of the three positions with .977 at catcher coming in second. His .889 fielding percentage probably explains why he didn't play more out there.

Overall Berger appeared in a total of 83 games for Oklahoma City in 1990 and made 306 trips to the plate. He posted a batting average of .236 and and on-base percentage of .325. He did walk 35 times but struck out 64 times as well. He also didn't have a lot of power as his 15 doubles, six triples, and five home runs showed.

Mike Berger was 27 years old in 1990 and had been in the minors since 1980. He really needed to blow the doors off if he ever wanted to make the show. That hadn't happened and he was consigned to Double-A Tulsa to start 1991 as another minor league season.
Posted by Spiff at 7:00 PM