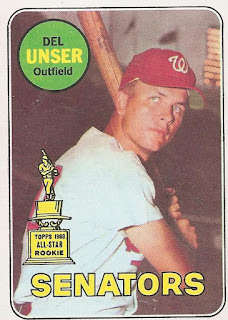 Apparently the ball Del Unser is looking at on card 338 of the 1969 Topps set is a slow-pitch soft ball. He seems to be looking up as if the ball is on a downward arc.

Del is the second Senator we've seen from the 1969 Topps set with the All-Star Rookie trophy on his card. Unlike Gary Holman, Unser avoided the sophomore jinx and stayed with the team in his second year.

Unser came in second in American League Rookie of the Year voting in 1968 with a .230 batting average, a .282 on-base percentage, and a .277 slugging percentage. He led the club in plate appearances and pushed veteran Fred Valentine out of a job.

In 1969 Del would keep the starting center field gig. He appeared in 149 games for Washington, all in center. Over the 1250.2 innings he played there he committed ten errors. That gave him a .972 fielding percentage, 10 points lower than the league average.

The Senators got an excellent follow-up season to Del Unser's rookie campaign. He needed some work on defense but his offense was just what the team needed. Instead of dipping, his numbers improved. Looked like he was a keeper and, if he could keep things trending in the right direction, he should be around for a long time. Washington seemed to have found their center fielder for the foreseeable future.
Posted by Spiff at 7:53 AM