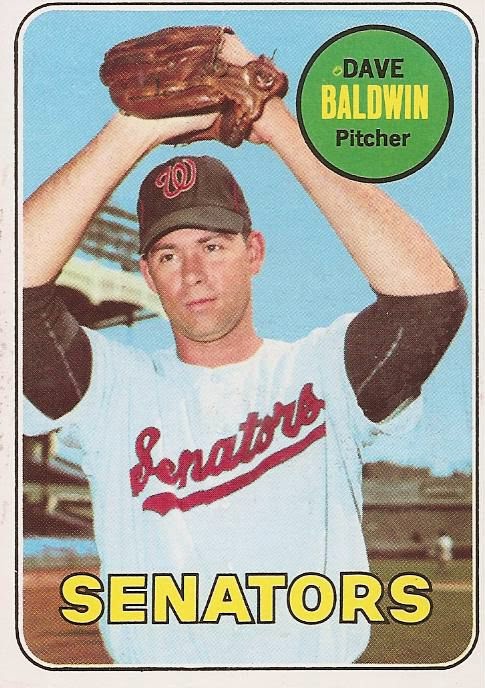 Coming off a downer season in 1968, Dave Baldwin was looking for a bounce-back year in 1969. Unfortunately for Baldwin, shown here on card 132 of the 1969 Topps set, it didn't turn out the way he wanted.

Used strictly as a reliever, Dave appeared in 43 games for the Senators in 1969 and pitched 66.2 innings. That was just three more appearances but 24.2 innings more than the previous year. Obviously Baldwin was staying in the game longer. Dave struck out 51 opposing batters and walked 34 for a strikeout-to-walk ratio of 1.50. That was a whole point lower than in 1968. His ERA totaled to 4.05, just .02 lower than the previous season, and his WHIP to 1.365, a rise of .127.

1969 had not been the season either Dave Baldwin or the Washington Senators were looking for from him. He hadn't been able to make any substantial improvement in his ERA and his WHIP and strikeout-to-walk ratio made a definite downward turn.

Perhaps the Senators decided Dave's old elbow injury was back or maybe they just gave up on the side-arming hurler. Whatever the reason, the final result was a December 4, 1969 trade to the Milwaukee Brewers for George Brunet.
Posted by Spiff at 11:28 AM